Mazda has taken the wraps of its all-new Mazda CX-5 crossover SUV. The new model has been fully redesigned along with a selection of new technologies as well as a new body color, called Soul Red Crystal with three layers of paint to symbolize company’s KODO—Soul of Motion design. 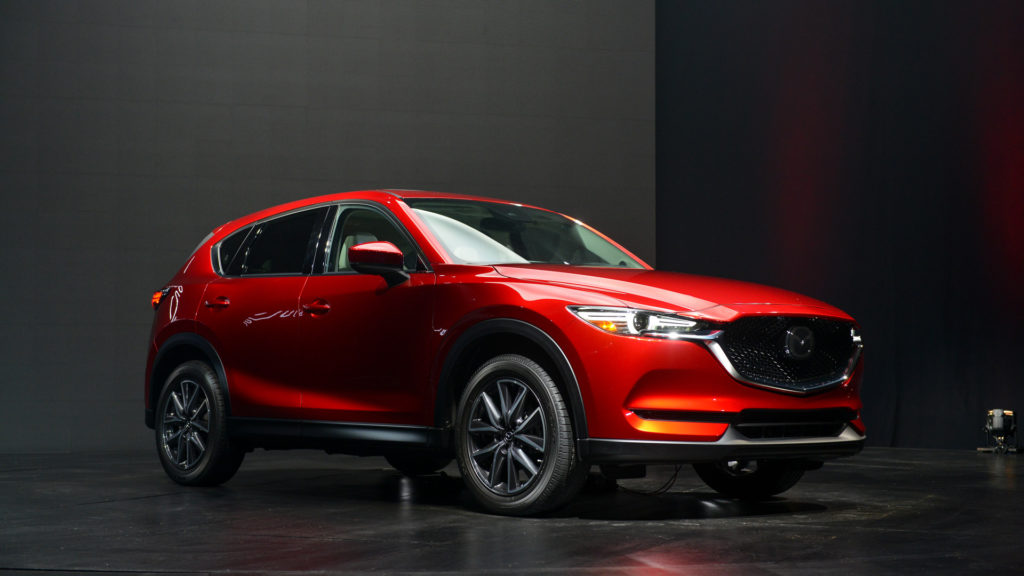 In terms of design, the second generation CX-5 is an all-new vehicle with some cues taken from the latest CX-9. The front now is approximately 10 mm wider than previously and adops a broader grille with the thinner and lower headlamps. The A-pillars are repositioned approximately 35mm rearward for better visibility, further aided by the smaller side mirrors. The rear has also minor changes like the thinner taillights. Mazda will also introduce a new body colour. Called Soul Red Crystal, it will be used as the SUV’s launch colour. It has 20 per cent greater colour saturation and 50 per cent more depth than the well-known Soul Red that is currently the brand’s hero colour. Thanks to the use of ultra-high-tensile steel the body has gained 15.5 percent more torsional rigidity, which Mazda claims also aids in the new SUV’s steering response, now using a column-type electric power-steering system.
Inside, the new CX-5 has been also thoroughly overhauled and now features a new Multi-Information Display (MID) to the right of the instrument cluster that adops a high-resolution 4.6-inch color TFT liquid crystal display (LCD). It also adops an Active Driving Display that projects information from the navigation system on the windshield. There’s also a 7-inch center display to the top of the dashboard that uses a special ‘optical’ bonding method that reduces the glass area for a clearer image. Other highlights include a three-spoke steering wheel, push-button start, Mazda Connect connectivity system which works in conjunction with smartphones and a10-spoke Bose premium sound system. The engine lineup will continue to consist of the 2.2-liter SkyActiv-D diesel engine, along with the 2.0-liter and 2.5-liter Skyactiv-G four-cylinder gasoline units. The engines are paired with either the six-speed Skyactiv-Drive automatic or six-speed Skyactiv-MT manual transmission. As standard, they are front wheel drive, but the brand’s predictive i-ACTIV AWD system, which helps prevent the front wheels from slipping is available as an option. The biggest drivetrain change will be the addition of Mazda’s G-Vectoring Control that will tweak the powerplant’s torque output for easier steering.