The 2018 Eagle Squadron Mustang GT: 100th Anniversary of the RAF 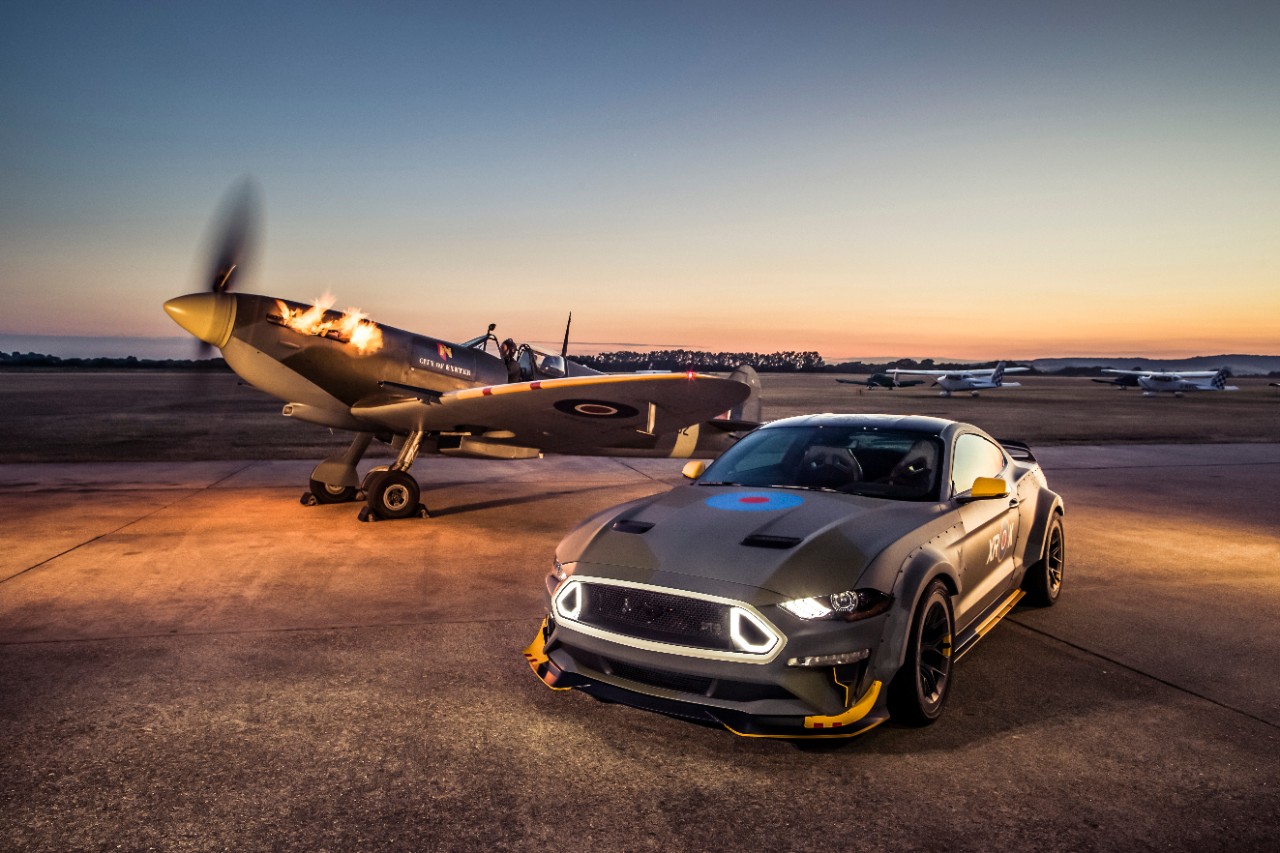 Ford, Vaughn Gittin Jr. Race To The Clouds At Goodwood With Eagle Squadron Mustang GT Ahead Of AirVenture Charity Event

GOODWOOD, U.K., July 12, 2018 – Ford Performance, along with drifting champ Vaughn Gittin Jr. have teamed up to create a one-of-a-kind Eagle Squadron Mustang GT to commemorate the 100th anniversary of the Royal Air Force for this year’s Experimental Aircraft Association’s The Gathering fund-raiser and auction on July 26 in Oshkosh, Wisconsin.

This year’s build is inspired by the Eagle Squadron, a group of U.S. volunteer pilots who flew combat missions alongside the Royal Air Force over Europe from British airfields near Goodwood prior to the United States entering World War II. Gittin, accompanied by Royal Air Force veteran Paul Miller, whose father “Dusty” served in Eagle Squadron in 1941 and 1942, will pilot the supercharged beast up the legendary Goodwood Festival of Speed Hillclimb today, then the car will be on display at the Ford booth for this weekend’s event.

“Supporting young pilots through the Experimental Aircraft Association’s fund-raising auction reflects Ford’s aviation history, tracing back to the company’s early days and the arsenal of democracy during World War II,” said Darrell Behmer, Ford Mustang design chief. “The Eagle Squadron Mustang GT build with Vaughn and the Ford design team is a great way to honor our heroes and keep the spirit of aviation alive for the next generation of American pilots.”

2018 marks the 20th year Ford has supported the Experimental Aircraft Association AirVenture event and the 10th one-off Mustang it has provided for auction. Notable Ford models inspired by other aviation legends include the 2011 Blue Angels and 2013 Thunderbirds editions. All auction proceeds will be donated to the Experimental Aircraft Association’s youth education programs, which encourage and support the next generation of pilots. To date, Ford has worked with the organization to raise more than $3 million.

A powerful and hungry beast awaits

Under the hood, a Ford Performance supercharger kit first introduced at the 2017 SEMA show helps the Ford 5.0-liter V8 churn out 700 horsepower and 610 lb.-ft. of torque at 12 psi of boost on 93-octane fuel. The engine is mated to a Tremec 6-speed manual transmission with Ford Performance short shifter, with power delivered to the road via an upgraded heavy-duty rear axle also supplied by Ford Performance.

“Beyond its menacing looks, this powerful and hungry beast mimics the brute force and maneuverability of an original Royal Air Force fighter jet,” said Gittin. “I really can’t wait to pilot it up the summit at Goodwood.” Aside from becoming the owner of this one-off Eagle Squadron Mustang GT, the high bidder will receive an all-expense-paid trip for two to Detroit in August to attend the 2018 Ford Woodward Dream Cruise and be presented with the car.

Jack Pelton, CEO and chairman, Experimental Aircraft Association, said Ford has once more come through to help the next generation of pilots find new pathways to flight. “With this Royal Air Force-inspired Mustang GT, Ford has again stepped up with a wonderful tribute to the legacy of flight that will also greatly support EAA’s efforts to encourage the next generation of aviators,” he said.