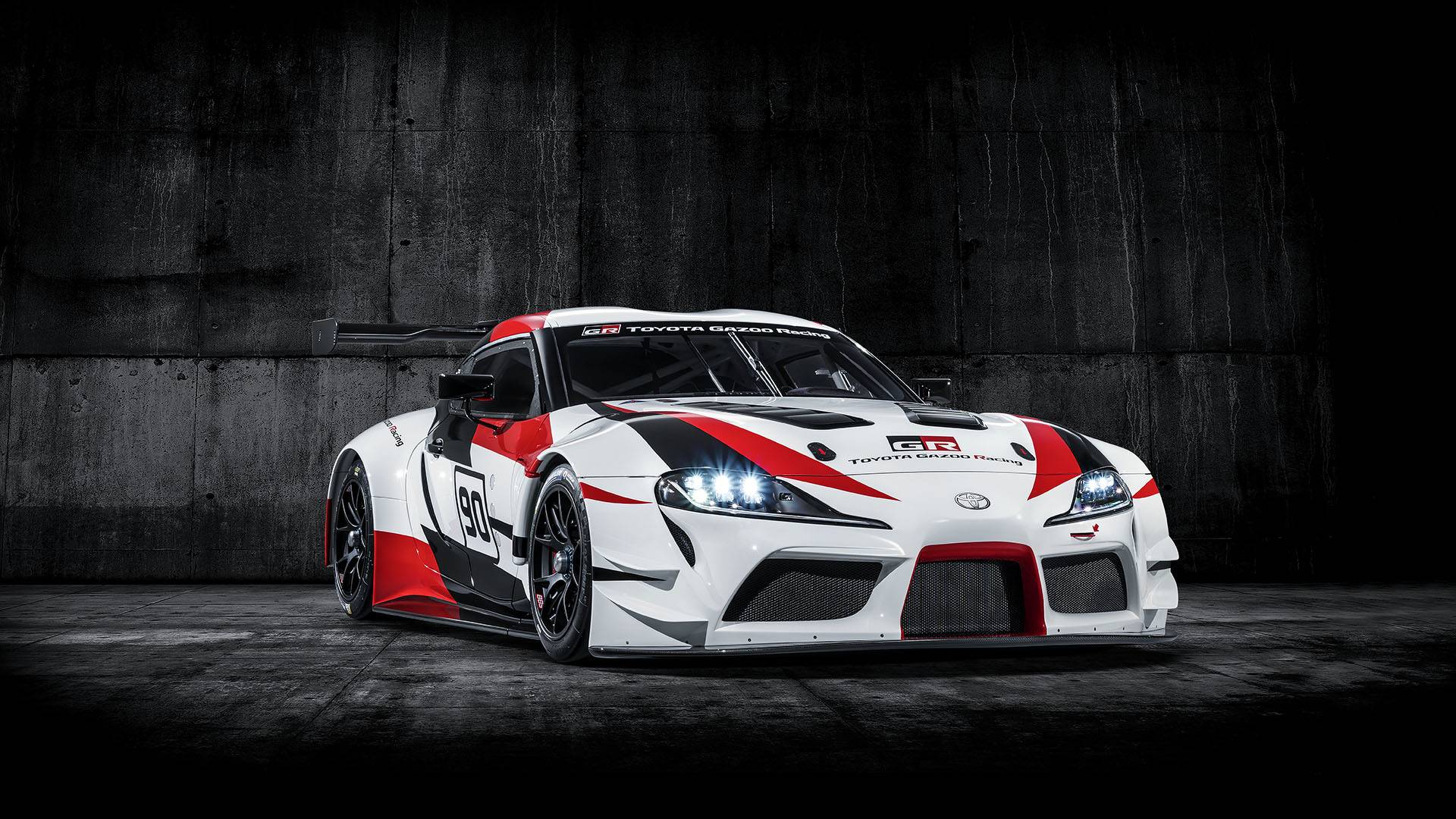 Modern racing concept signals Toyota’s commitment to bring back its most iconic sportscar.
March 06, 2018
GENEVA (March 6, 2018)–The GR Supra Racing Concept makes its world debut at the Geneva Motor Show, reviving the name and spirit of the most celebrated model in Toyota’s illustrious sportscar heritage and demonstrating Toyota’s commitment to bringing the Supra back to the market. It also shows the future potential for a car that can deliver high performance both on road and track.

The GR Supra Racing Concept revives the great heritage of one of Toyota’s most famous sports cars. The Supra name evokes power, performance and handling that defined a succession of world-class cars for a quarter of a century. As a thoroughbred sports car, the Toyota Supra built a reputation both as a formidable performer on the road and as an all-conquering machine on the racetrack, dominating Japan’s top-level GT racing series and earning legions of fans.

The Toyota Supra still enjoys an iconic status among sports car aficionados, 16 years on from the end of production. Its enduring popularity has been helped by its success as a popular model in the Gran Turismo® driving simulator video game series, which is only playable on PlayStation consoles, and as a starring car in the first film in The Fast and the Furious global action movie series.

The Supra badge first appeared in 1978 on a larger and more powerful version of the second-generation Celica before becoming established as a successful model in its own right. 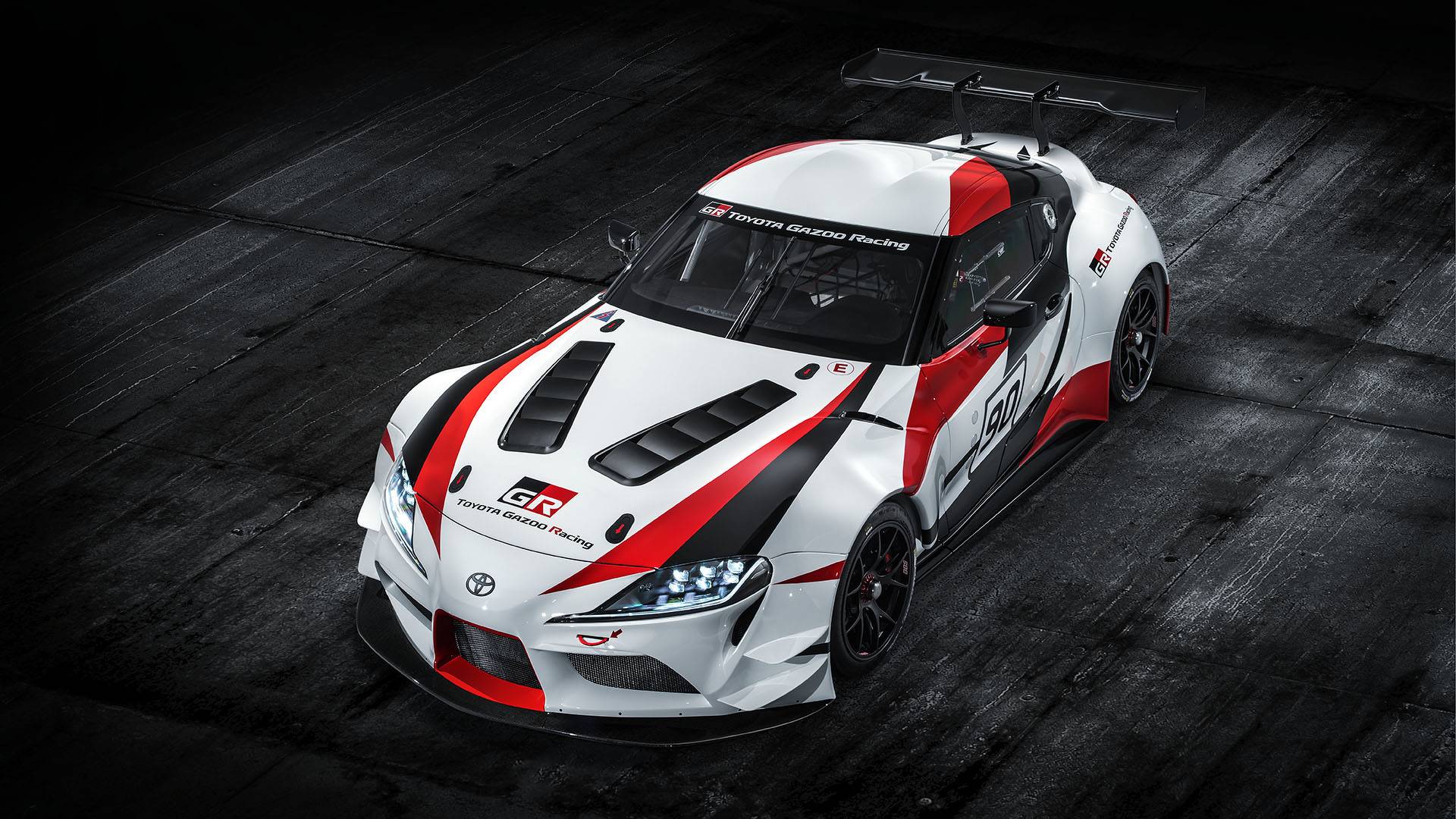 The front engine/rear-wheel drive GT sportscar remained in production until 2002, and in its final generation it was Toyota’s most powerful production model.

The Supra’s reputation was greatly enhanced by its success in motorsport. Most notably, the fourth-generation Supra, introduced in 1993, became the dominant force in the All-Japan GT racing – today’s Super GT series – winning the GT500 class four times.

The Toyota Supra also competed in American IMSA sportscar racing in the 1980s and twice appeared at Le Mans in the 1990s.

A compact, two-door car, the GR Supra Racing Concept has a pure front-engine/rear-wheel drive configuration and makes use of advanced lightweight materials in its construction.

Created by TOYOTA GAZOO Racing, the concept perfectly expresses the “fun to drive” quality that is intrinsic to Toyota’s commitment to making ever-better cars. The large “90” race number on its doors is a historical reference to Supra’s codename and a big visual clue to the fact that this concept heralds Supra’s return in a fifth generation.

Its development is true to the belief of Kiichiro Toyoda, founder of the car company, that participation in motorsport provides the challenges of performance and durability that can directly help develop better cars, while at the same time generating interest and excitement among motoring fans.

This ethos has been fully embraced by both Toyota Motor Corporation President Akio Toyoda and by TOYOTA GAZOO Racing, with the pursuit of success at the highest levels of international motorsport, including the World Rally Championship, World Endurance Championship and the Le Mans 24 Hours race. Taking part in these and other racing series around the world provides technical learnings that can be transferred from the race track or rally stage to development of not just new generations of Toyota’s sports-focused GR models, but also to its wider range of vehicles, driven by tens of millions of people around the world.

The GR Supra Racing Concept is to be featured in a new update of the Gran Turismo Sport® video game, developed by Polyphony Digital Inc., and scheduled for release in April 2018. 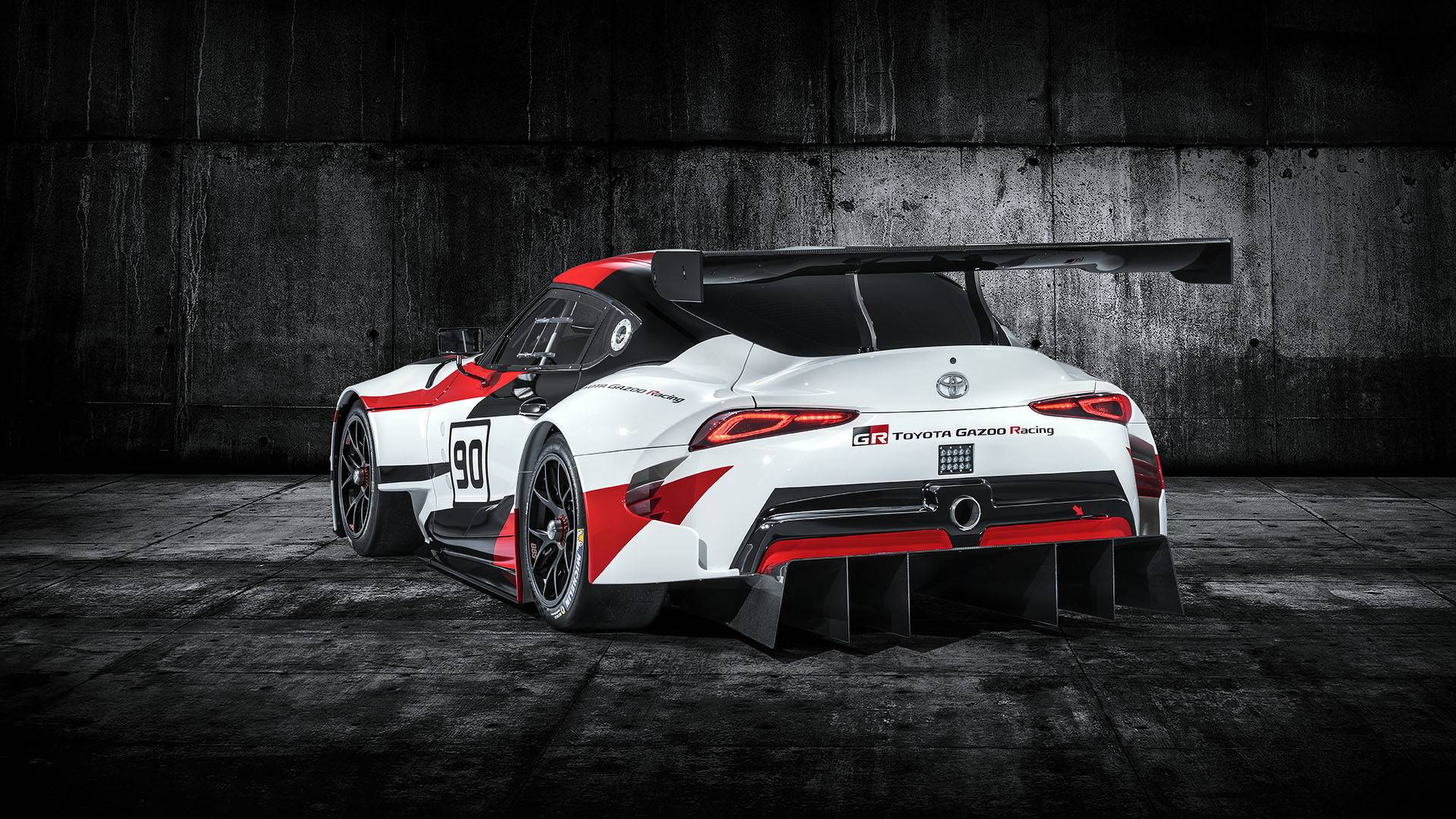 The racing concept has a dramatic bodywork design that includes a large rear wing. It makes extensive use of strong but lightweight composite material for elements such as the wide front and rear bumpers, front splitter and rear diffuser, side skirts, door mirror housings and the rear wing. The hood is crafted from the same material and features louvred air inlets. The windscreen and side windows are made of plastic.

The cabin is entirely competition-focused and is fitted with a racing dashboard and OMP driver’s seat and safety harness. OMP has also supplied the quick-release steering wheel, mounted on a racing column and equipped with a paddle shift system. The doors are lined with carbon fiber panels and the dashboard includes a racing display.

Competition safety requirements are met by a full roll cage and fire extinguishers, and the fuel and brake lines, pedal box, battery and wiring looms are all designed to competition standard. 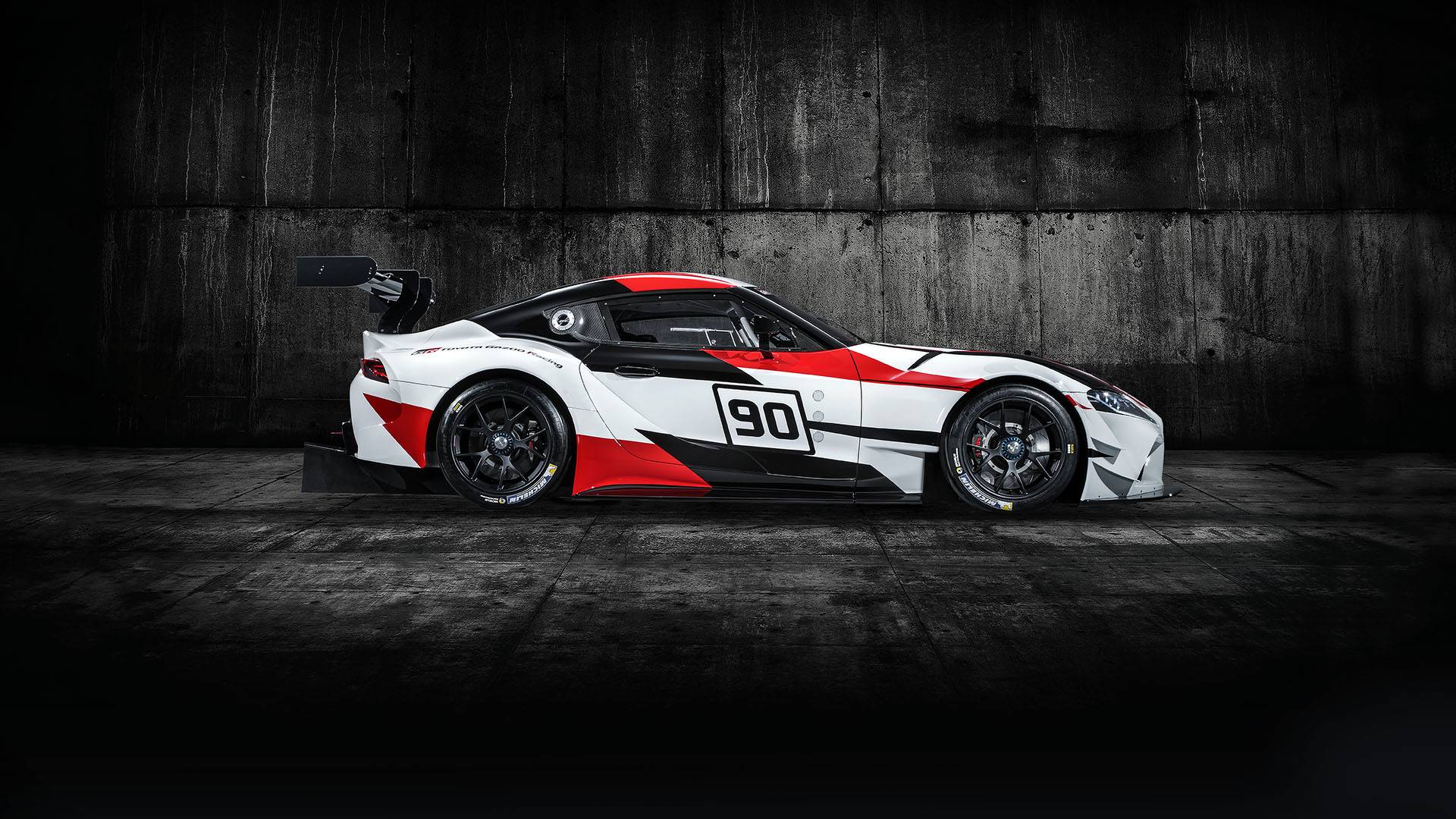 TOYOTA GAZOO Racing first competed in Europe in 2007 (as GAZOO Racing). It began a long association with the Nürburgring 24 Hours with two Toyota Altezza cars (equivalent to the first generation Lexus IS) and a team comprising drivers and mechanics who were Toyota employees.

TOYOTA GAZOO Racing has since become the international umbrella organization for Toyota’s global sporting program. In just the past year it has claimed two victories during its first season in the FIA World Rally Championship and won five rounds of the FIA World Endurance Championship. Its new vehicle development program has produced the Yaris GRMN performance hatchback, the latest in a successful series of performance-focused GR-branded cars and the first GRMN model to be developed and built in Europe. 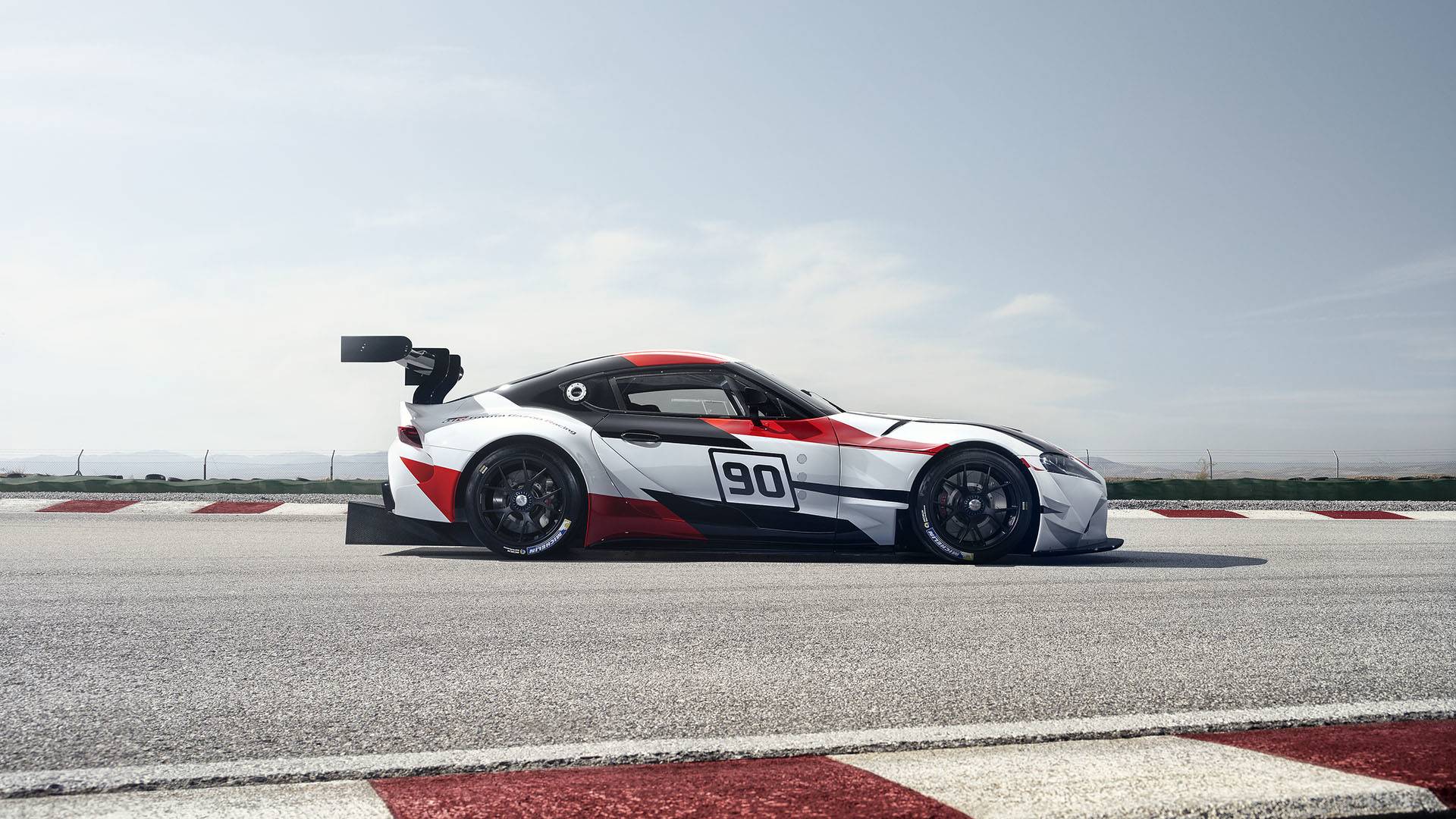 Its work is based on three pillars: developing people through taking part in motorsport; creating fans through the excitement of motorsport and producing fun-to-drive cars; and making ever-better cars by using the knowledge gained from competition.

By bringing employees into the racing garages and pit lane, TOYOTA GAZOO Racing helps them improve their skills and help them acquire new abilities, working as a team in extreme, high-pressure environments. The personal development aspect of this work again feeds directly into Toyota’s making of ever-better cars, supported by people who have the experience and vision to excel. Source: Toyota